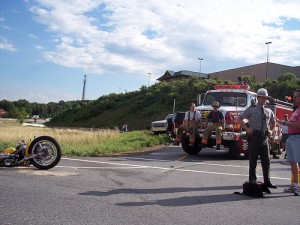 A missouri truck accident case was recently settled for $6.5 million in Benton County, Missouri. The insurance company was required to pay $1,000,000 and the trucking company was responsible for the remaining $5,500,000.

The plaintiff in the case sustained injuries when a large tractor trailer collided with the back of his motorcycle as he was driving on Highway 65 in Benton County, MO. Apparently, the truck driver had made an attempt to get the brakes on the vehicle repaired at an auto shop at some point before the accident earlier that day. He was unable to successfully get the brakes repaired, however, and he was dispatched by the company to go pick up a load that he was already scheduled to get. The truck accident happened as he was on the way to that dispatch.

The plaintiff does not remember any details about the crash, but he and his attorney, held that the trucking company was liable for the accident and damage because of the defective brakes on the tractor trailer. But the truck driver maintained that the plaintiff had slowed down on the Highway or was stopping, and those actions contributed to the accident.

The trucking company, however, tried to argue that the truck driver was not acting in the course and scope of his employment at the time of the crash, meaning he was performing actions unrelated to his job. If true, this would absolve them of liability and the truck driver would be the sole responsible party.

This defense, however, was not likely to be accepted and when the company began making offers to the plaintiff it became apparent that they were aware of this.

With the help of his attorney this plaintiff was able to achieve a reward amount that he was happy with.

Truck accidents have the potential to be devastating. An experienced truck accident attorney can expertly handle the legal aspects of your accident case, protecting your rights and getting you the compensation you deserve in order to get the medical care you need so you can recover from injuries and return to every day life. You need an experienced attorney who understands what your injury claim is worth, and will negotiate a fair settlement that gives you and your family what you need.

If you or a loved one have been the victim of a truck accident contact the Law Office of James M. Hoffmann.  Our experienced Missouri truck accident lawyers will fight to defend your rights and work to get your family the compensation that are entitled to.  Call us at  (314) 361-4300 to schedule a free and private consultation.