In Washington, an enormous semi truck that was carrying thousands of pounds of bread, blocked all of Interstate 405’s southbound lanes, after it overturned during the morning commute on June 4. 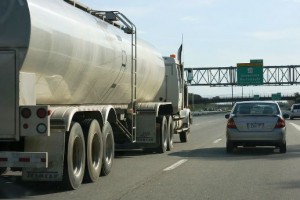 The crash happened around 7 a.m. There were no serious injuries, though several people sustained minor injuries and were clearly shaken up after the unexpected accident. It took hours to clear the wrecked rig from the freeway.
According to one State Trooper, it would seem that the driver of the semi truck, a 29-year-old Olympia man, caused the accident. Police have not determined yet exactly what the driver was doing just before the accident, but it appears that he became distracted and crashed into three passenger vehicles, before the tractor trailer rig rolled over and landed on its side. All four freeway lanes were blocked. It took some heavy equipment to get all the wreckage cleared.

The semi driver was cited for second-degree negligent driving and fined $550.

The driver of the the car directly behind the semi told police that it appeared as if the semi truck driver didn’t brake in time as traffic was slowing in the lane ahead. He saw the huge rig veer first toward the shoulder and then careen back all the way across the entire four lanes of traffic, rolling over and onto its side.

He described the event. “He came right across the freeway, right in front of me. It was like something out of an action movie – I was expecting Arnold Schwarzenegger or somebody surfing on the back of the truck or something like that.” He was relieved that nobody was injured after witnessing the wreck, but said that it was “dumb” that the truck driver was distracted while driving.

A woman involved in the crash was driving through the area when the semi rig slammed into the back end of her SUV, crushing it. She said that to her it looked like the semi truck driver did his best to avoid hitting nearby vehicles. “I’m very thankful. I think the truck driver did a great job in going off to the side of the road. If he would have hit me head-on, I probably would not be here,” she said.

Another driver whose car was car clipped either by the semi or by some debris, reiterated the previous sentiment, that it was very fortunate that no one was seriously hurt.

“Maybe a higher power was looking out for us, and we were lucky today,” he says. “We’re all fortunate to be here. Damage to cars is fixable. Damage to people is not easily, and nobody’s damaged – and that’s a good thing.”

Fortunately this particular accident did not result in serious injury or death for those involved, but there is always potential for these accidents to be devastating and deadly. It is important to waste no time finding an attorney who can help.